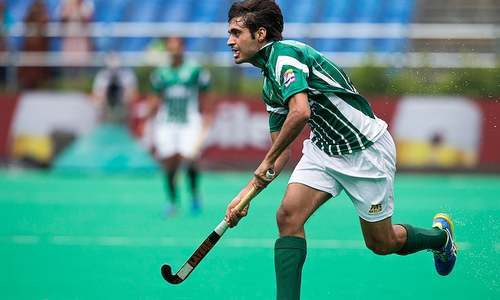 Shahbaz Ahmad is a former field hockey player from Pakistan who is also known by his nickname as “Shahbaz Ahmed Senior“. He was born in to Arain family.

He is considered to be among the best forwards in the history of field hockey. He joined the Pakistan National Hockey Team in 1986, and was captain of the national side, that led his team to the 1994 Men’s Hockey World Cup victory. “He played a major role in Pakistan victories in 1994 World Cup in Sydney, Australia and Champions Trophy 1994 in Lahore, Pakistan.” After the Atlanta Games in 1996, he played for Dutch club Oranje Zwart and for German club Harvestehuder THC from Hamburg for a couple of years.

Called the Maradona of Hockey he has represented Pakistan in the Champions Trophy tournaments held in 1986, 1987, 1988, 1989; 3rd Asia Cup, New Delhi 1989; 7th Hockey World Cup, 1990 in Lahore, BMW Trophy Amsterdam, 1990, 11th Asian Games Beijing, 1990, 12th Champions Trophy, Melbourne and Hockey World Cup, Sydney, 1994. He made his world-famous run down against Australia in the same tournament. ” But in 1994, at the Sydney World Cup, in the pool match between Australia and Pakistan, Australia had a similar free hit just outside the Pakistan circle which was intercepted and moved onto Pakistan’s Shahbaz who then executed his famous run with Australia’s Ken Wark chasing him. Shahbaz drew a covering defender and reverse-sticked the ball to Kamran Ashraf, who scored.” “Twenty years have passed, but the memories of his breathtaking runs against Australia, Germany and the Netherlands are etched in memories of millions.”

He played at three Olympic Games, winning a bronze medal in 1992.

Shahbaz Ahmed Sr. was The Maradona of Hockey. He represented his country and won the 1994 World Cup and 1994 Champions Trophy. He was also the 1990 and 9194 World Cup Player of the Tournament. His Olympic best is the 1992 bronze medal which was held in Barcelona. Some of his awards include gold medals in the 3rd Asia Cup, silver medals in Champions Trophy and BMW Trophy. Ahmad Sr. was also awarded the President’s Pride of Performance in 1992 by the Government of Pakistan.

Why Was He So Good?

Shahbaz Ahmed Sr. displayed his trademark dribbling skills, body dodges, cross field runs, ball control and stick work in the field and the world was amazed by his flawless talents. He is regarded as one of the best forwards of hockey. He is a player with God-gifted skills and he worked just as hard as anyone.

What You May Not Know:

He is the only person in history of field hockey to win two consecutive players of the tournament awards during the 1990 World Cup in Lahore and 1994 World Cup in Sydney.

Shahbaz is currently a country manager of PIA in Jeddah-Saudi Arabia.

Shahbaz Ahmad is regarded as one of the best forwards in the game for his agility, body dodge and ball control. He is the only player in the history of Field Hockey to win two consecutive ‘Player of the Tournament’ awards in the 1990 World Cup in Lahore, and at the 1994 World Cup in Sydney. He leads the list of most-capped Pakistanis with 304 caps (a total of 304 games) in international field hockey.