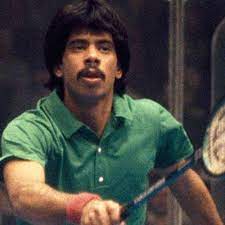 Jahangir Khan is a former World No. 1 professional Pakistani squash player. He won the World Open six times, and the British Open ten consecutive times (1982-1991). He also won 555 consecutive matches, one of the longest winning streaks ever by any top athlete in any sports. Jahangir Khan is widely regarded as the greatest squash player of all time.

Jahangir Khan is a man whose name is synonymous with squash. A man universally recognised as the world’s greatest ever player and an athlete who transcended his sport to be acknowledged as world’s greatest ever sportsman. A man who set the bar so high, precious few others have come close, never mind surpass his achievements.

Jahangir Khan was born in Karachi, Pakistan on the 10th December 1963 and is considered to be the greatest player in the history of squash.

During his distinguished career, Jahangir was ranked World No.1 and won the World Open six times and the British Open a record ten times.

From 1981 to 1986, Jahangir was unbeaten and during that time won 555 consecutive matches – the longest winning streak by any athlete in top-level professional sport as recorded by Guinness World Records.

Jahangir retired from the Men’s Professional World Tour 1993 and served as President of the World Squash Federation (WSF) from 2002 to 2008 when he became Emeritus President.

Jahangir was coached initially by his father Roshan and then by his late brother Torsam and cousin Rahmat who would go on to coach Jahangir throughout his record breaking career.

As a child Jahangir was physically very weak and despite doctors advising him not to take part in any sort of physical activity his father encouraged him to play their family game following two hernia operations.

After missing out on selection for the Pakistan team for the 1979 World Championships in Australia, Jahangir entered the World Amateur Individual Championship and at 15 years-of-age became the youngest ever winner of the prestigious championship.

In November 1979, Jahangir’s older brother Torsam died suddenly of a heart attack during a tournament match in Australia. Torsam’s death affected Jahangir greatly and led to him considering quitting the game before pursuing a career in the sport as a tribute to his brother.

In 1981, Jahangir became the youngest winner of the World Open at the age of 17 when he beat the then World No.1 Geoff Hunt Australia in the final. That championship marked the start of an unbeaten run which lasted for five years and 555 matches.

Jahangir was distinguished for his incredible fitness and stamina which Rahmat Khan helped him develop through a punishing training and conditioning regime. Jahangir was widely regarded as the fittest player in the sport.

In 1982, Jahangir astounded everyone when he won the final of an International Squash Players Association (ISPA) Championship without losing a single point.

Jahangir’s unbeaten run finally came to end in the final of the 1986 World Open in France when he lost to Ross Norman of New Zealand. Norman had been chasing Jahangir’s unbeaten streak after being beaten time and time again and was famously quoted “One day Jahangir will be slightly off his game and I will get him”.

Speaking about his unbeaten sequence of 555 consecutive matches, Jahangir said: “It wasn’t my plan to create such a record. All I did was put in the effort to win every match I played and it went on for weeks, months and years until my defeat to Ross Norman in Toulouse in 1986.”

“The pressure began to mount as I kept winning every time and people were anxious to see if I could be beaten. In that World Open final, Ross got me. It was exactly five years and eight months. I was unbeaten for another nine months after that defeat.”

At the end of 1986, compatriot Jansher Khan challenged Jahangir’s domination. Jahangir won their first few encounters in late 1986 and early 1987, but Jansher finally scored his first win over Jahangir in September 1987 with a straight games victory in the semi-finals of the Hong Kong Open.

Jansher then went on to beat Jahangir in their next eight consecutive encounters, including capturing the 1987 World Open title.

Jahangir managed to end Jansher’s winning streak over him in March 1988 and went on to win 11 of their next 15 meetings. The pair met in the 1988 World Open final with Jahangir emerging the victor. By that point it had become clear that squash now had two dominant players and the pair would continue to dominate the sport for the rest of the decade.

Jahangir and Jansher met a total of 37 times in professional competition with Jansher winning 19 matches and Jahangir taking 18 matches.

Jahangir did not win the World Open after 1988 but was able to maintain a stranglehold over the prestigious British Open title which he won a record ten successive times between 1982 and 1991.

Jahangir retired from the Professional Squash Association (PSA) World Tour in 1993 after helping Pakistan win the World Team Championship in Karachi. He was honoured by the Government of Pakistan with the awards of Pride of Performance and civil award of Hilal-e-Imtiaz (Crescent of Distinction) for his achievements in squash. Jahangir was also named Sportsman of the Millennium in Pakistan.

“Hashim Khan, Jahangir Khan, and Jansher Khan are the best squash players the world has ever known with Jahangir the best of the three. If Hollywood only knew his story of tragedy, grit and determination it would make another movie like Chariots of Fire. Many of those who know him consider him the best athlete who ever lived,” said former President of Pakistan Pervez Musharraf.

Jahangir Khan was presented with an honorary Doctorate of Philosophy by London Metropolitan University for his contributions to the sport.

As a result of his complete dominance in squash he was nicknamed “The Conqueror” (a loose translation of his first name).

He is the son of Roshan Khan, brother of Torsam Khan and a cousin of both Rehmat Khan and British singer Natasha Khan (better known as Bat for Lashes.

He currently lives in Karachi, Pakistan with his wife Rubina (m.1995) and their two children.

Khan was coached initially by his father Roshan, the 1957 British Open champion, then by his brother Torsam. After his brother’s sudden death he was coached by his cousin Rehmat, who guided Khan through most of his career. In 1979, the Pakistan selectors decided not to select Khan to play in the world championships in Australia but he entered the World Amateur Individual Championship, at the age of 15, and became the youngest-ever winner of that event. In November 1979, Torsam Khan, who had been one of the leading international squash players in the 1970s, died suddenly of a heart attack during Australian Open match in Adelaide Australia. Torsam’s death profoundly affected Khan. He considered quitting the game, but decided to pursue a career in the sport as a tribute to his brother.

He retired as a player in 1993, and has served as President of the World Squash Federation from 2002 to 2008, later became Emeritus President.

In 2018, Khan became global President of Shahid Afridi Foundation (SAF) in a ceremony held at Japan. SAF was founded by former cricketer Shahid Afridi which aims to provide healthcare and education facilities in Pakistan.