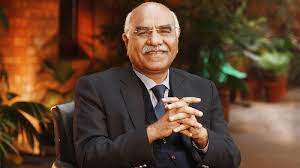 Dr. Muhammad Amjad Saqib, a prominent social worker, volunteer and development professional, graduated from King Edward Medical College Lahore and completed his Master’s degree in Public Administration (MPA) through the Hubert H. Humphrey Fellowship, from the American University, Washington D.C., USA. He joined civil service of Pakistan (DMG) in 1985. In 1998, he joined Punjab Rural Support Programme (PRSP), as General Manager and remained with this organization for seven years. He resigned from civil service in 2003. Since then, besides rendering philanthropic and social services, he has been providing consultancy services to Asian Development Bank, International Labour Organization, UNICEF, World Bank, and Canadian International Development Agency. His areas of expertise include poverty alleviation, microfinance, social mobilization and education management.

He is the author of four books and is a well known columnist, writing for daily Jinnah, Pakistan, Jang and Nawa-i-Waqt. He has attended many national and international conferences and represented Pakistan at different forums. In recognition of his literary achievements, Government of the Punjab awarded him Khush Hal Khan Khattak Literary award in 1993. He is regular guest speaker at Civil Services Academy (CSA), National Institute of Public Administration (NIPA), Lahore University of Management Sciences (LUMS) and many other professional forums.

Dr. Saqib is the founder of Akhuwat, first ever interest free microfinance programme. This programme operates from mosques and churches and has opened new vistas in the domain of social mobilization and poverty alleviation. This is the largest individual based lending programme in the country and is referred to in many international universities as a unique and innovative model in microfinance. He is Akhuwat’s Executive Director and main driving force since its inception in year 2001.

Amjad Saqib was born in 1957 in Kamalia, Faislabad a small city in Punjab.

He is married to Farrukh Amjad, they have two children,

He entered his professional life as a doctor after completing his MBBS degree from King Edward Medical College in Lahore. He didn’t limit himself to a medical career but joined the Civil Service of Pakistan. Being a philanthropist, he stopped his Civil Services career to serve his people and founded Akhuwat for serving humanity.

In 2003, he decided to devote all his efforts towards working for public welfare and social development through the establishment of Akhuwat and decided to resign from the Pakistani Civil Service.

He provides consultancy services to different organizations including International Labour Organization, Asian Development Bank, UNICEF, World Bank, and Canadian International Development Agency. He has been invited to speak on the issues of poverty alleviation and social entrepreneurship at different institutions such as Harvard University, University of Oxford, and University of Cambridge. He was invited to speak at the United Nations Economic and Social Council on ‘Taking Action to Improve Lives’ conference, where he spoke about the need of adopting an integrated and holistic approach towards poverty reduction.

Amjad’s Akhuwat is a non-profit and charitable Pakistani organization established according to Islamic Principles of Brotherhood. This foundation believes in a society free of poverty based on equity and compassion.

Established in 2001, Akhuwat was the first organization in Pakistan to tackle the issue of poverty through the disbursement of interest-free loans also known as Qarz-e-Hasan. In 2020, Akhuwat’s Islamic Microfinance program has disbursed PKR 122 Billion ($760 million) in interest-free loans with a repayment rate of 99.8% to 3 million families across Pakistan. The organization has a network of more than 4000 employees in over 800 branches across 400 cities in Pakistan.

Akhuwat is founded in accordance with the Islamic principle of MawaKhat or brotherhood. The earliest example of Mawakhat is seen in the solidarity formed by the citizens of Medina and the Muhajireen (or Meccans) who had migrated to Medina to escape persecution. The people of Medina shared half of their wealth and resources with the migrants. Inspired by this spirit, Akhuwat seeks to invoke this concept of brotherhood through its work. Keeping this in mind, Akhuwat believes in a poverty-free society that is based on the principles of compassion and equity.

Other than providing interest-free loans, Akhuwat has expanded its work into the field of education, health, and supporting the most marginalized segments of society. Akhuwat’s programs include Akhuwat Education Services, Akhuwat Clothes Bank, Akhuwat Transgender Support Program, and Akhuwat Health Services. It has launched Pakistan’s first fee-free University in Kasur. Akhuwat College, Kasur is a residential college that caters to students from low-income households who despite their talent and desire to pursue education are unable to do so due to financial constraints. The aim of the college is not only to provide these young people with quality education, but also focuses on cultivating their unique talents, inspiring a deeper sense of ethics, and inculcating the values of discipline, hard work, and volunteerism.

Akhuwat’s Education Services includes a network of over 300 schools and 4 colleges. Akhuwat has distributed 2.5 million clothes to low income families across all provinces of Pakistan. This project was appreciated by the Punjab Government and Federal Government. He made a recent visit to Sweden and Denmark to encourage overseas Pakistanis to come forward and do the necessary effort at their end. The Akhuwat Transgender Support Program provides psycho-social therapy, skills and vocational training, literacy and health workshops to thousands of transgenders across Pakistan. They have held free medical camps and awareness seminars, and provided free treatment and vaccinations for diseases such as hepatitis C and hepatitis B

Founded in 2001, it is the 1st Pakistani organization to handle poverty issues via granting interest-free debts, called ‘Qarza-e-Hasan.’ Microfinance program of this foundation has given One-Hundred and Twenty Billion loans having 99.8% re-payment rate to Three million Pakistani families.

The organization’s education facilities include a network of Three-Hundred schools and Four colleges. It has granted 2.5 million dresses to low-earning families all over Pakistan. Federal and Punjab Govt appreciated this project.

He visited Denmark and Sweden to seek help from overseas Pakistanis for their Pakistani brothers. This foundation’s Transgender-Support Program provides vocational training, psycho-social therapy, literacy, health workshops, and skills to transgender people in all Pakistan corners.

Under this program, awareness seminars, free medical-camps, free vaccinations, and treatment for diseases were provided for ailments such as Hepatitis B and C

He supports several private and public institutes and plays an integral part in establishing many service delivery-institutes in Pakistan. He performs as an advisor for various organizations striving to foster social welfare, such as UNICEF, Canadian Intl Development Agency, Intl Labor Organization, World Bank, and Asian Development Bank.

His distinguished accomplishment and service is Akhuwat’s establishment and Mawakhat implementation for the alleviation of poverty.

He appears as a guest speaker at several institutes such as LUMS (Lahore University of Management Sciences), NIPA (National Institute of Public-Administration), Civil Services Academy, and some other forums. Dr. Amjad mostly speaks on social entrepreneurship and poverty alleviation topics at institutes, including Cambridge, Oxford, and Harvard University.

The literary works of Muhammad Amjad Saqib include: