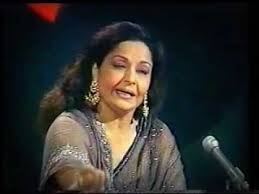 Farida Khanum (born 1935) is a Pakistani Ghazal singer from Punjab. The Times of India has called her “Malika-e-Ghazal” (Queen of Ghazal)

She was born in 1935 in Calcutta and raised in Amritsar. Her sister is Mukhtar Begum.

Farida Khanum gave her first public concert in 1950 and then joined Radio Pakistan where she courted fame and fortune. She became a star when Pakistan’s president Ayub Khan invited her to a public recital in the ’60s.

The ghazal she is most associated with is Aaj Jaane Ki Zidd Naa Karo.

Tassawar Khanum (born 1950) is a Pakistani Ghazal singer. She is mostly known for singing in Urdu and Punjabi in Pakistani films and television during the 1970s and 1980s. Her most popular songs are perhaps Tu Meri Zindagi Hai and Agar Tum Mil Jao.

Tassawar Khanum was born in , Pakistan. During her childhood she was a neighbor of singer Pervaiz Mehdi who was a good friend of her father. She and her father would often go Pervaiz Mehdi’s house while he was practicing. It was Pervaiz Mehdi who asked her father to ensure that Tassawar should receive an education in music after he overheard her copying while he practiced. After this she began to take music lessons with sarangi nawaz Ustad Butta Ali Khan.

Tassawar Khanum first appeared on PTV. She was popular in 1970s and 1980s when she sang film songs.

Tassawar Khanum was married to Rais Ghulam Ali Khan Muree in 1973 until his death in 1992. She has a son and two daughters and several grandchildren. – She got married right after she recorded her song in film Rangela. She has now one grandson and one granddaughter and she is very proud to be a grandmother.